The Viral Assault On Small Businesses

Authored by MN Gordon via EconomicPrism.com,

This year, fear of a deadly pandemic triggered the ruling class to spread authoritarian lockdown orders.  The god of science, like a burning bush, told them to remove their sandals and deliver policies of regression.  A paranoid public was quick to comply.

Humans have been battling viruses since well before the wheel was invented.  According to archaeologists, a fast moving epidemic roughly 5,000 years ago wiped out a prehistoric village in what is today northeastern China.  Dead bodies were stuffed inside a dwelling – the Hamin Mangha – that was later burned down.

Another mass burial, the Miaozigou site, took place about the same time and in the same general area.  Together these discoveries suggest there was a rapid outbreak of an acute infectious disease.  An epidemic ravaged the entire region.

The viral spread of submicroscopic pathogens has the potential to alter the flow of history.  Soldiers returning to the Roman Empire after war against Parthia in 165 AD brought back more than the spoils of conquest.  The Antonine Plague, which is suspected to have been smallpox or measles, claimed an estimated 5 million lives.  The epidemic had devastating consequences throughout the Roman Empire; perhaps bringing forward the demise of Pax Romana.

About 1,350 years later Spanish forces, led by Hernán Cortés, delivered the gift of smallpox as they conquered the Aztec capital of Tenochtitlán.  About a decade after, Spanish conquerors spread the plague to the Incas.  An estimated 90 percent of the native population was killed off by the pestilence.  Aztec and Inca civilizations were swiftly wiped off the map and replaced by New Spain.

Indeed, plagues come and go.  Yet they can dispense lasting consequences.  Sometimes, as is the case with coronavirus, pandemics have much less to do with the virus than the societal change the virus activates.  Marcus Aurelius, the last of the Five Good Emperors, in the time of the Antonine Plague, penned the following in his Meditations:

“To bear in mind constantly that all of this has happened before.  And will happen again—the same plot from beginning to end, the identical staging.  Produce them in your mind, as you know them from experience or from history: the court of Hadrian, of Antoninus.  The courts of Philip, Alexander, Croesus.  All just the same.  Only the people different.”

Maybe so.  But the plot in 2020 is staged in the court of sinister.  Fear of a deadly pandemic has opened the door for madmen to walk through.  Upon entering the court, they put into practice sinister plans for controlling populations and swelling dependency.

According to state and local governments, constitutional rights are not rights at all; they’re privileges.  And they’ve been suspended in your best interest.  To keep you safe.

Moreover, if you want to work, have extended family over for dinner, worship with a congregation, or walk down the street without a mask, you’re selfish.  You’re not doing your part to stop the spread.

Klaus Schwab, a madman, and founder of the World Economic Forum (WEF) is a man of social science based totalitarian rule.  Individuals that think for themselves and pay their own way in life are not part of his master plan.  He prefers a docile public, subsisting one notch above poverty, that’s fully dependent on a global state.

In his new book, “COVID-19: The Great Reset,” Schwab and his co-author admit that COVID-19 is “one of the least deadly pandemics in the last 2000 years.”  Yet the ruling class has acted like this is the new smallpox.  What gives?

The Viral Assault On Small Businesses

COVID-19 has provided the perfect cover Schwab’s disciples to assault one of America’s remaining expressions of freedom and independence: small businesses.  With lockdowns, politicians get to pick and choose what businesses survive and what businesses don’t.  They get to decide who’s essential and who isn’t. 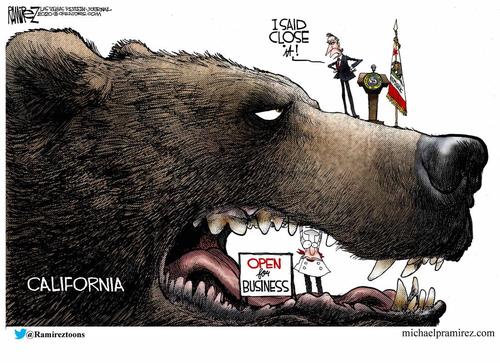 What’s more, legislation with the supposed intent to stop the spread of coronavirus has devastated small businesses.  Roughly 100,000 small businesses have permanently closed.  At the same time, big corporations are reaping record profits.

One of the more tyrannical laws, which is acting as a viral assault on small businesses, is something warmly named the Families First Coronavirus Response Act (FFCRA).  Attorney Ash Staub explains:

“The FFCRA only applies to employers with fewer than 500 employees.

And for every small business that’s crushed by autocratic rule there’s the corresponding loss of the owner’s dreams and their employee’s livelihoods.  But that’s not all.  It also denotes another step from freedom and liberty towards control and dependency… and into a darker more medieval world.